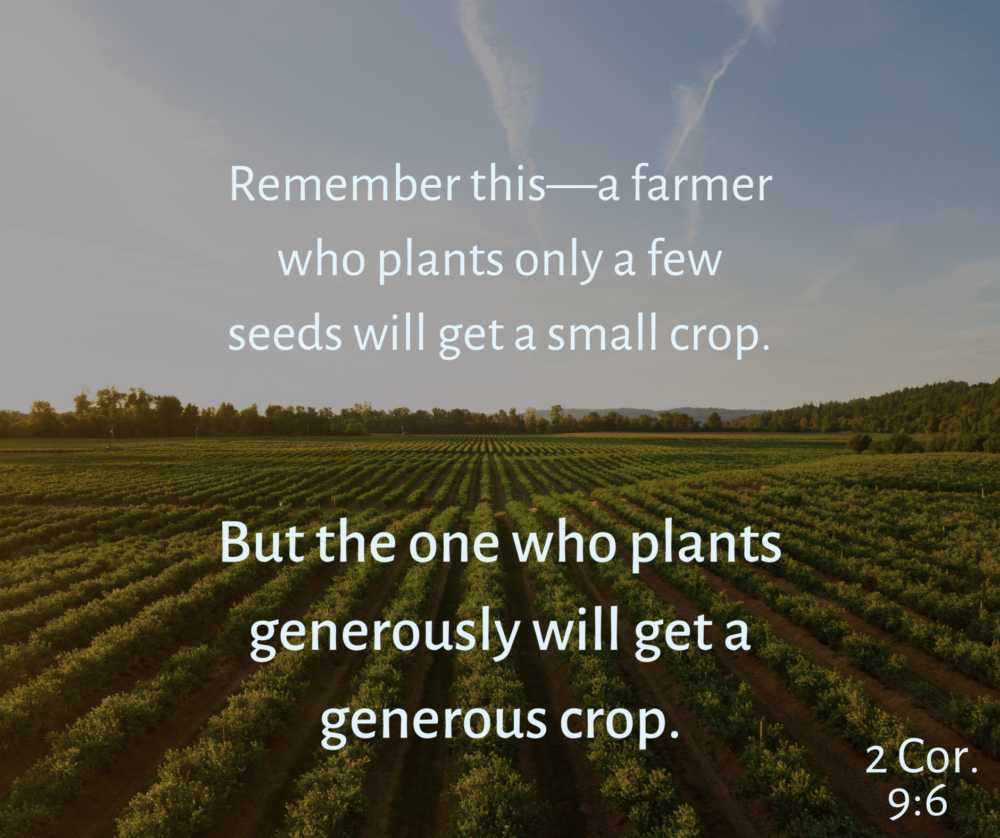 There’s a law of sowing and reaping that every farmer or backyard gardener knows:

One of my cousins farms for a living. He plants plenty, tends the crop, then harvests it. Were he to cut the acreage he plants in half or reduce the amount of seed he puts into the ground, his harvest would not be nearly as plentiful as it is normally.

In this letter to the believers at Corinth, Paul used this law to bolster them. They had pledged a great gift of money for the believers in Jerusalem.

Remember, Paul had history with this church. He knew their maturity wasn’t always where it should be. He knew they needed the reminder to collect the money they had promised and have it ready for pick up by the men Paul was sending.

There was a twofold reason for doing it this way. Paul wanted the gift to actually make it to Jerusalem and he didn’t want the Corinthian believers to be embarrassed, scrambling at the last minute to scrape up pennies when they had promised dollars. He wanted their reputation to remain good.

Trouble is, we all need that someone who cares about us and our reputation as much as we do. Someone outside our skin who knows us and our flaws who will be honest and caring enough to nudge us to do the right thing.

How many times have we said we would do something, then we forget all about it? I don’t even want to think about it!

Having that someone who holds us accountable to our word is a priceless gift.

And then, when we can BE that person? What a blessing! What a way to demonstrate love for another, by building them up honestly through helping them maintain their integrity.

Since Paul was writing to remind the believers to give, he also prompted them to give generously by reminding them of this law of sowing and reaping.

Their crop wasn’t going to be corn or soybean or cotton, it was going to be souls. Disciples, followers of Jesus. Paul reminded them that their giving wasn’t just about passing money from their group to another, it was really all about building the Kingdom of God.

Paul knew that the outcome of their giving would be revealed in Heaven, where those who believed because of the Church having the needed funds would be known.

We should consider this each time we decide what we’re going to give to our local church. Are we going to just drop a dollar in or a full tenth of all we earn or more?

Are we going to grumble and complain because “they” aren’t spending it “right”?

Right after this verse, Paul talks about giving grudgingly or cheerfully. I think sometimes we worry about the seed and forget the crop.

Whether giving time or money, we should always keep the harvest in mind so we know how much seed to plant.