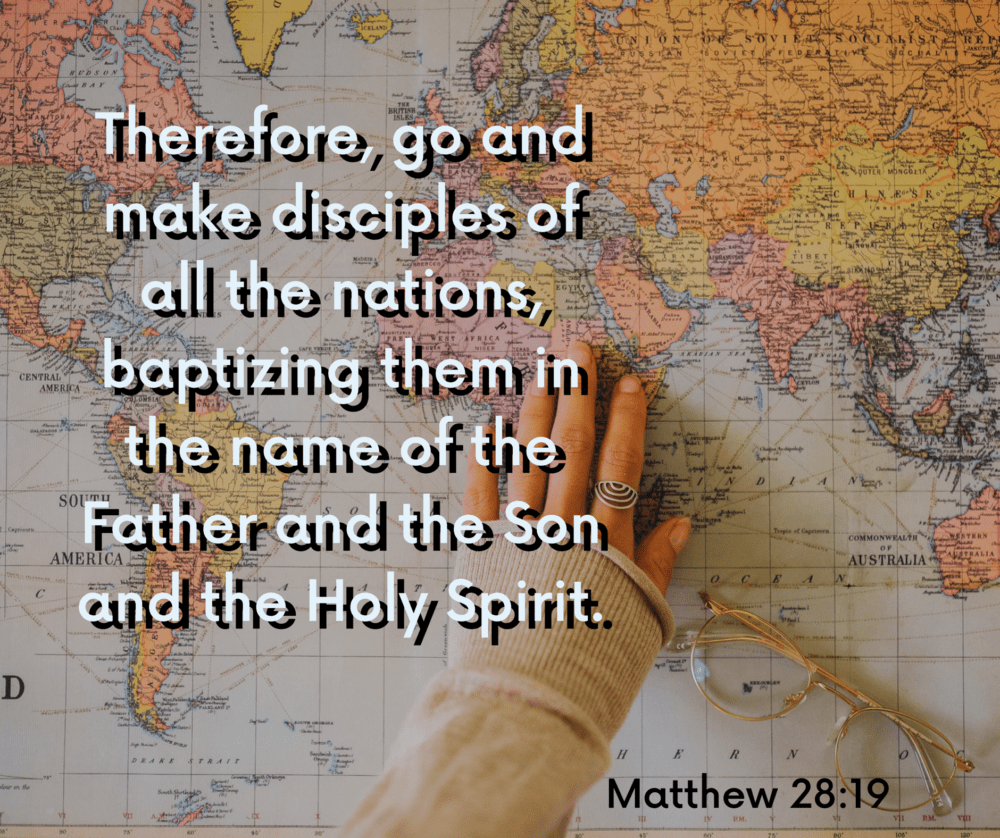 Therefore, go and make disciples of all the nations, baptizing them in the name of the Father and the Son and the Holy Spirit.

I once had a pastor who said, “Whenever you see a “therefore” in scripture, take a look to see what it’s there for.”

Maybe he was the one who taught me to examine all around the verse to better understand.

Here we find the eleven apostles at the foot of a particular mountain because the resurrected Jesus had told them to be there at that time.

As they’re hanging out there, checking their watches, Jesus walks up and tells them, “I have been given all authority in heaven and on earth.” Then he charges his closest friends on Earth with making disciples of all the nations.

That ‘given all authority’ is huge. He was saying that ALL power of ABSOLUTE rule was His. Once again, He declares Himself Almighty God.

He does that just before He tells His followers to go into all nations to help the people learn of Him, believe in Him and obey Him. Once those people became followers, they were to be baptized.

That must have seemed an exceptionally daunting task! Just getting to the nations would prove difficult, not to mention that throughout the Roman Empire, they were being hunted down and killed.

Still, in order to obey the Savior – the one they had seen die on the cross, laid in the grave, then alive and standing before them – they had to get to work.

Just how do you accomplish this, though? Eleven men? Well, when we read Acts, we see how they shared the truth about Jesus one day and had THREE THOUSAND choose to believe and follow the Lord. That crew had to be taught how to obey the commands given by Jesus. Then they started telling others and those started telling more. This telling grew exponentially, and now you and I hear the story of Jesus because those eleven were obedient. Is your mind blown yet?

The thing I’m guilty of is inviting people to church more than I invite them to Jesus. I’ve got to work on that.

We can say that is living a Christian life in front of others causes them to want to know the Lord, but if that were the case, why aren’t more coming to Him?

Could it be because we are fallible people and others can’t get past us to see Him?

Jesus said GO. I don’t think that requires a passport. I think that means intent. I believe that wherever we go, whatever we do, we must be ready and willing to help people know of Jesus and what He did for us, help them believe in Him and obey His words.

What do you say? Today, let’s get intentional about obeying the Lord by discipling others.