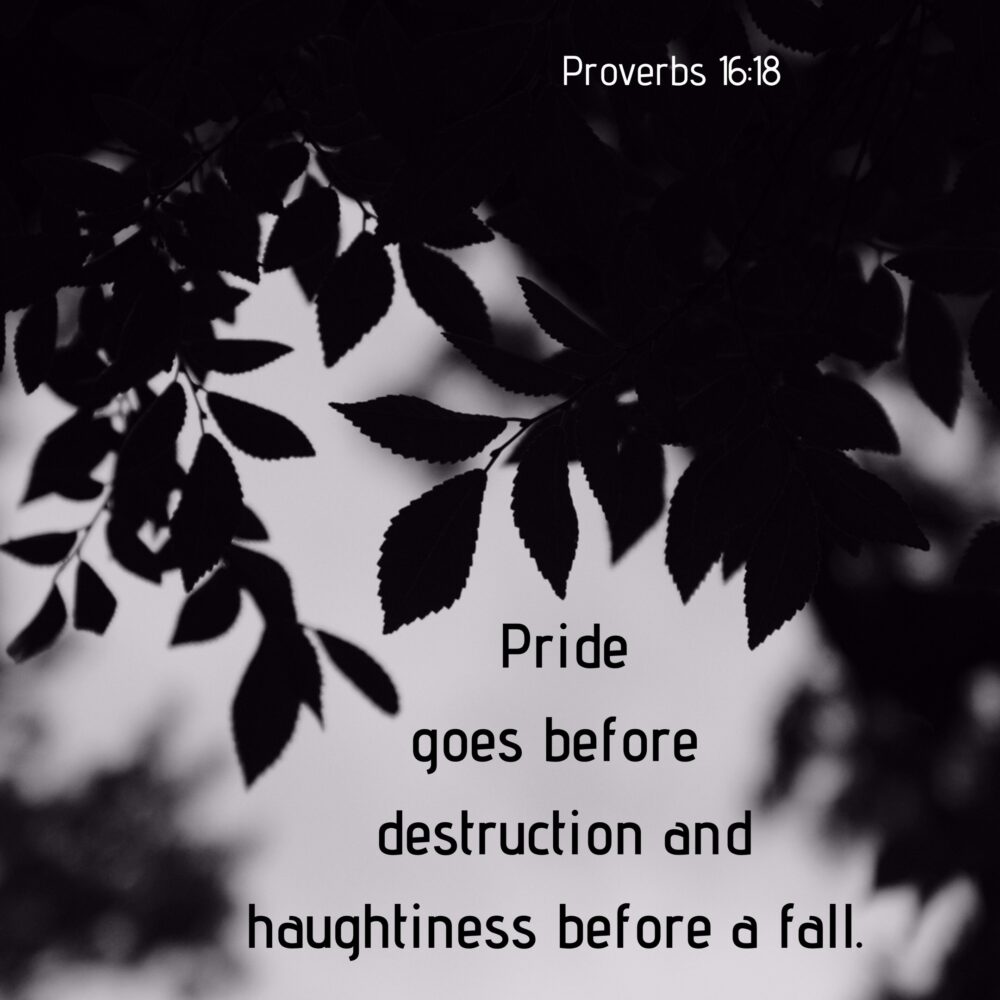 How many of you have heard about a politician caught with their hands in the cookie jar, using monies donated for things they weren’t donated for and landing in jail?

How many have heard of a church leader in hot water for doing ungodly, immoral, unlawful things, suddenly in the news and facing charges in a court of law?

It’s sad and laughable that in most of these cases we can see that these folks did what they wanted with wanton disregard for the people they were hurting while fully believing that they wouldn’t face consequences because of who they are.

Their pride in their station in life, their place of authority, or their position in the community became a shield to them behind which they operated. Their haughtiness a sword wielded constantly.

God says, “Pride goes before destruction, and haughtiness before a fall.”

Sometimes when we see these people working their wrongs with seeming impunity, we think God missed it, or worse, that He overlooked it.

Rest assured, my friend. Neither has happened. God sees. He knows the motives of hearts. And when HIS time is right, we’ll see and hear the explosion of destruction and witness the fall.

I know of a case of a sexual predator dressed as a youth pastor who moved up the ladder in the church world for twenty years. In the matter of a year, his behavior was revealed. He was released from his lucrative job, he was indicted on several charges, was tried and convicted of very serious charges.

Even now he denies that what he did was “really” wrong, but he’s been found out.

Twenty years. His victims thought God had missed it, had even rewarded the man. He thought he had escaped without paying for his atrocities.

Nope. Destruction came. The fall happened. Now those who know and love him are decimated as well.

If you’re hiding something you’ve done, read James 5:16 and get to work. Remember Matthew 5:23-24 and Galatians 6:7. It’s time to do something difficult.

It’s time to take ourselves off the throne and recognize our position in relation to God’s.

If you’ve been hurt by someone’s pride and haughtiness, I am so sorry. First I’d like to tell you they WILL experience destruction and they WILL fall. It WILL happen. God said so. We just don’t know if that’s here or Heaven – or if they will even get there.

I’d love to talk to you about how I was able to experience relief from the things done to me – things that held me captive in a self-destructive cycle for my entire adult life until four years ago. Message me.

Let’s examine ourselves today (Lamentations 3:40).
Let’s consider what we do and say. If they’re not pleasing to God, it’s a pretty safe bet that they’ve hurt someone else and we need to make amends for that before destruction hits and the fall is unrecoverable.

Let’s look at what’s been done to us. Pull that hurt out of the place where you’ve buried it and look at it. Do you need to talk to the person who did that? Do you need to report a crime?

Let’s choose to no longer let that thing occupy our thoughts and determine our actions. Let’s become humble and ask God to lead us to healing. He’s waiting.