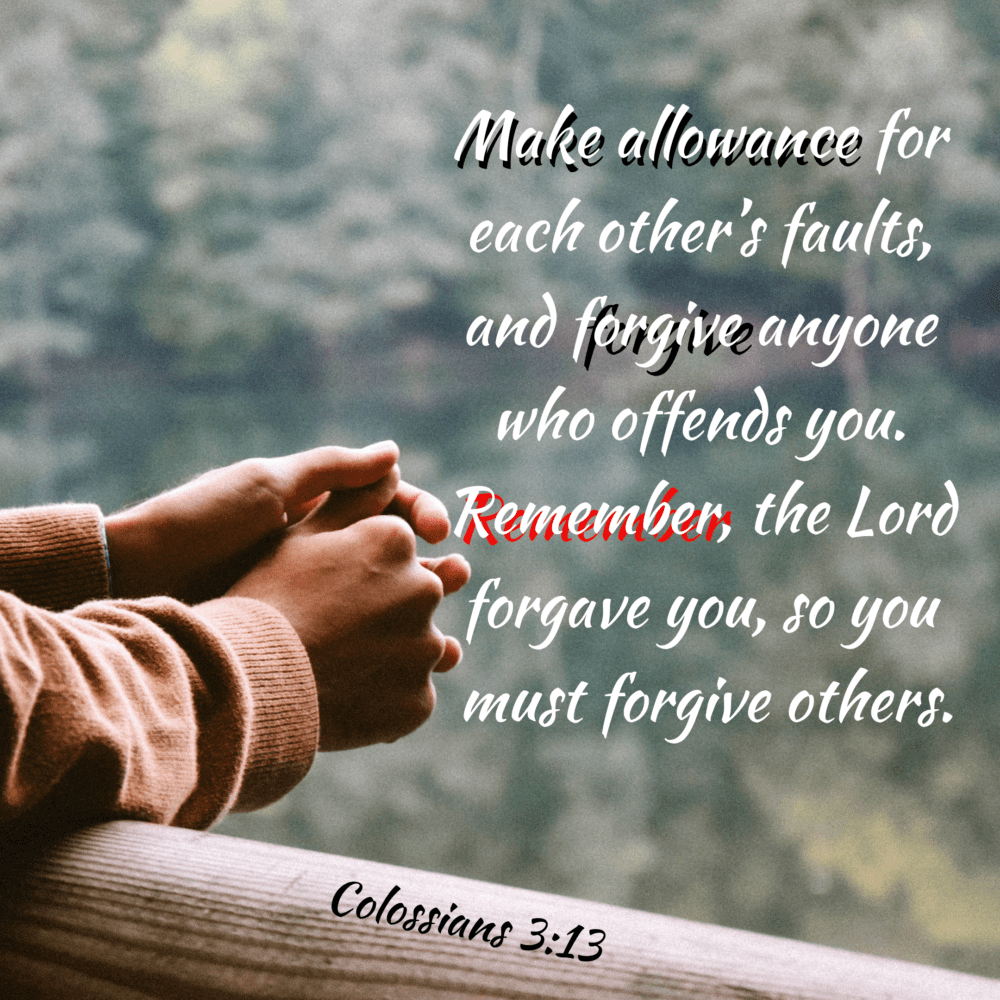 Paul wrote in his letter to the believers of Collasae, “Make allowance for each other’s faults, and forgive anyone who offends you. Remember, the Lord forgave you, so you must forgive others.”

Some translations say “put up with” instead of “make allowance for.”

Whew! I don’t know about you, but sometimes, putting up with some folks is the hardest thing ever; and sometimes, those people are my spiritual siblings.

Then he says to forgive anyone who offends us? Please!

I don’t know what was going on in ancient Colossae back then, but it sounds like some feudin’ was afoot. Almost like our here and now.

We focus on, mull over, and tell everyone about that offense, no matter how big or small.

What we don’t seem to do is consider what’s going on with that offender.

That lady who cut you off in traffic? Before you said those ugly words, did you notice her tear-stained cheeks? Did you hear her whispered, “My husband just died, I’m sorry. I was headed home”?

That guy that butted in front of you at the store? Before you bumped him with your cart, did you hear him on the phone saying he would get to the hospital as fast as he could?

That woman at church who never puts anything in the offering? Before you mentioned that to your tribe, did you hear her telling the administrator how she loves using the online giving because she can give the day the paycheck comes in instead of waiting till Sunday?

See, we’re not in the heads of the people who offend us. We don’t know the ongoing good or bad happening in their lives. We DO know that every person we meet is human just like we are, with all the faults and foibles that go with that.

So, we’re supposed to make allowances for the humanity of our fellow believers. Maybe they smack when they eat and interrupt conversations. Make allowance.

Please note, though:
there’s a difference between
faults and sins.

And when we’re offended, there’s a process for dealing with that and it doesn’t include telling your hairdresser or barber. Check out Matthew 18.

God has some pretty high expectations of His children. Sometimes they’re really hard to think about, much less do. Yet He said forgiveness is a must, so we’d best be getting on with it.

Some things that were done to us are so heinous that forgiveness seems impossible. We might even say, “I’ll never forgive him/her!”

I get that. I had to forgive some people of some pretty horrible things.

Somewhere along the way, we’ve gotten the idea that saying “I forgive you” means “I excuse you” or “What you did is okay.”

That’s not it at all.

Saying “I forgive you” says: Despite what you did, despite the trauma you caused to me and in me, I am choosing to no longer require repayment for a debt you can never pay.

It’s wiping a slate clean. It’s declaring a very real, very high debt is paid in full even if it’s not acknowledged by the offender.

Oh yes, it’s a huge act of the will to do this. It’s not a frivolous toss of the hands. It’s heart rending. It’s gut wrenching. But when it’s done, it’s mind-freeing, it’s spirit-filling, it’s physically relieving —- for the forgiver!

Today is a great day to put on some God-goggles, to look at every encounter through the lenses of God’s perspective and choose to put up with the faults of our fellow believers and forgive those who offend us.

Today is a great day to begin the process of forgiveness. Even though it’s hard for us, when we remember how offensive our ways were to God and how He forgave us before we ever even acknowledged them, it becomes easier. (Not easy, easiER.)

Let’s make new choices today and keep making them tomorrow and every day after.