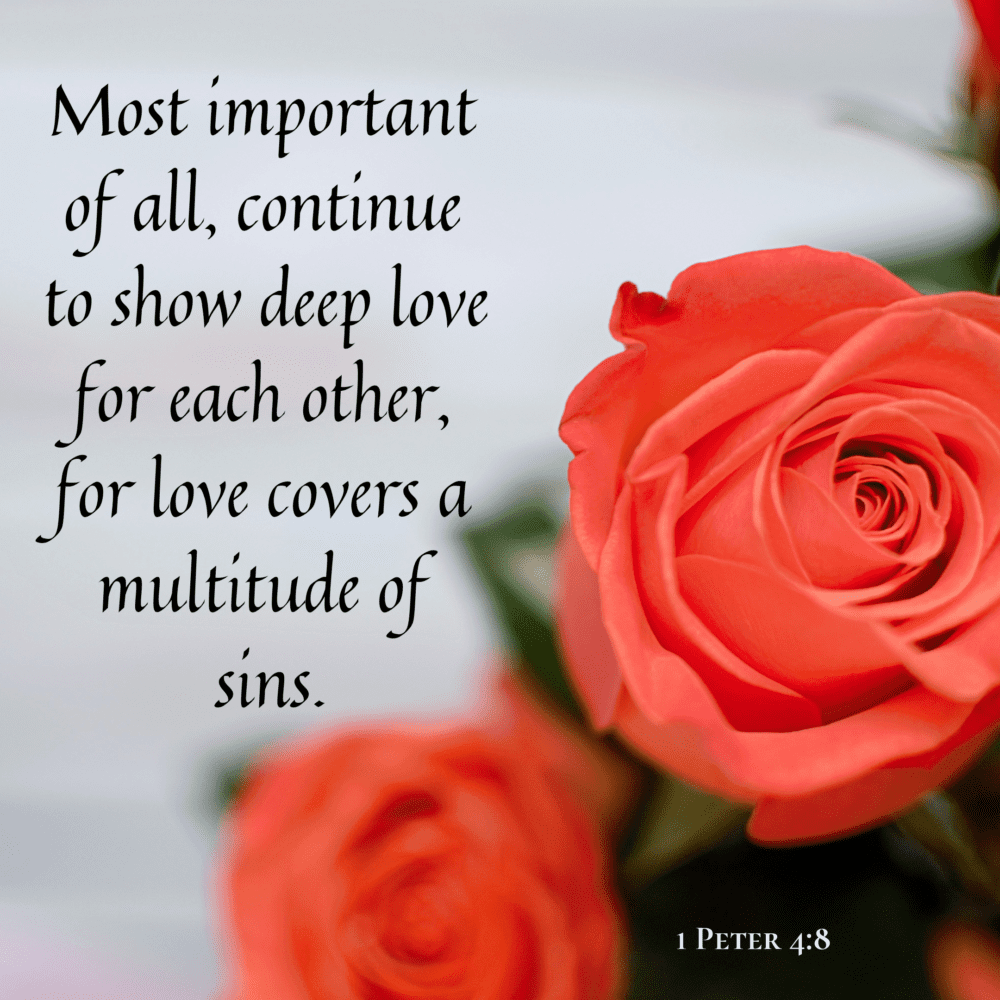 Peter wrote to believers in Jesus, “Most important of all, continue to show deep love for each other, for love covers a multitude of sins.”

Because of my past, I had a real problem with that last phrase. Coverups aren’t a good thing to me.

However, I fully believe that God gave those words to Ol’ Pete to put down on paper, so I decided to examine what He meant.

What I learned is that this ‘covering a multitude of sins’ does NOT mean whitewashing sin or ignoring it. It certainly doesn’t mean hiding it and acting as though it never happened, allowing the sinner to continue on in that sin, harming others and themselves.

What it means is that our deep love for other believers will cause us to confront their wrongdoing, whether it’s missing the mark (sin), a rebellion against God (transgression), or a perversion of something created good (iniquity).

That confrontation shouldn’t include shouting and finger-pointing. It should be more like Nathan’s confrontation of King David. Calm and laid out by the Spirit. It’s being done from a place of love.

To me, this is the greatest act of love any Christian can do. It’s great to be there for someone who is grieving, celebrating, or wrapped in chaos, but to me, those pale in comparison to walking to the brink of eternal disaster and bringing one back to the fold of God.

Let me clear that up. I do not believe that a person who is truly a follower of Jesus, a person who is really saved, will ever be dropped by the King. I do think there are some people who have followed rules and culture and have deluded themselves and others into believing they are saved. God says we know the truth of that matter by the fruit that’s borne.

If a person is truly saved, has truly accepted Jesus’ sacrifice for their salvation from eternal condemnation, then they take up a sin that they continue in, they WILL suffer eternal disaster – their relationship with the Savior is tarnished, the crowns they could have laid at His feet are not there, and never will be. I can’t imagine being sad in Heaven, but I’m sure some will be less happy than others.

If we can love our fellow believers enough to show them their sin and walk them back to the redemption of Almighty God, we have not only rescued that one, we have rescued those hurt by that one, because the brother or sister we’ve confronted will seek forgiveness and reconciliation and make whatever restitution is needed. They are agreeing that what they did was wrong and they will do whatever it takes to be forgiven and to make that other person as whole as possible.

Unfortunately, in today’s church world it has become commonplace to never confront anyone because it will hurt – either their feelings or their reputation.

Which is better, to suffer the brief acute pain of dealing with the sin perpetrated and seeking forgiveness and making restitution OR to endure the chronic pain of ignoring it and whitewashing it and allowing it to continue?

Great love forgives.
To forgive, one must examine what needs forgiving.
To be forgiven, one must accept that they have sinned against God and others. That requires self-examination.

Our deep love for one another requires it, though. So today, let’s love deeply, not by nitpicking the sins of others, but by being mindful of our own lives and watchful for others. If there is an offense, go to the offender like Jesus said in Matthew 18.

Your deep love for another believer may bring real redemption to them and healing for the hurting.