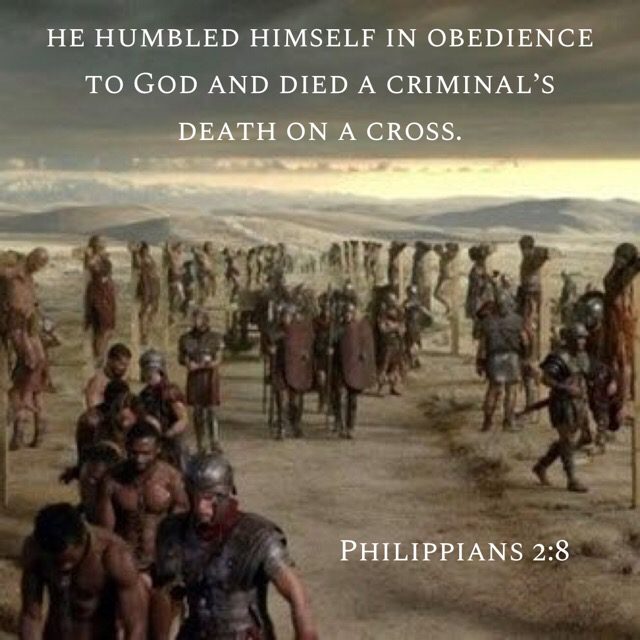 Crucifixion wasn’t new when Jesus walked the Earth He created. It had already been around hundreds of years.

The Romans, though, adding what they had learned from the Babylonians and Persians with what they knew of human anatomy, perfected the torture aspect of the death sentence.

This mode of death was reserved for those the Romans considered the worst criminals. This included slaves who had run away from their masters and thieves. The worst crime to the Romans, though, was insurrection – being an enemy of the state. If you resisted military action or worked to overthrow the Roman government, your punishment was the cross. (Some of us would be in deep trouble if this existed today.)

The reason this very tortuous, very public, very humiliating capital punishment was used had more to do with crime prevention than criminal punishment.

See, this death sentence was carried out in public. From lashings to death, the criminal was naked before the people, physically and emotionally. Their body completely uncovered, every cringe of pain visible, their every groan of anguish heard. The horror of their struggle to breathe, pushing down on the nails in their feet to raise up enough to catch a breath then dropping their weight onto the nails in their wrists to exhale until they could no longer, was right there, impossible for the townsfolk to miss.

As a result, every slave, every thief, every person who hated the way the government did business, saw what could happen to them. For many, it changed their minds about taking action on their thoughts.

The Jewish leaders who despised Jesus knew all about these dynamics of Roman law and they used them brilliantly as a tool to rid themselves of this rabbi of unconventional teachings.

Now, before we get all excited that the Jews killed Jesus or the Romans did it, let’s revisit Philippians 2:8.

“he humbled himself in obedience
to God and died a criminal’s death
on a cross.“

Jesus WENT to the Cross. To the bystanders it looked like He was dragged there, but that doesn’t take into account that Jesus is fully God even as He is fully man. He was stronger than Samson. He could have knocked over ALL those soldiers with a word, much less his strength. BUT he did not.

He walked calmly from the Garden of Gethsemane to his first unlawful trial, on to the next and the next.

He allowed Himself to be tied to a scourging post and whipped past the point of recognition.

He endured those thorns being driven into his head, a robe placed on bloody open flesh then ripped off again.

He permitted the soldiers to lay the beam across His bruised shoulders, the muscles and blood open to the wood, and He began the walk to the mount outside the city where He knew He would be put on display.

The leaders wanted to curtail any thoughts of anyone else doing these radical things Jesus did or taught. Crucifixion was a perfect means of accomplishing that.

God wanted this heinous, torturous, humiliating death viewed by so many so that the depth of His sacrifice for mankind was evident.

Hear me, y’all. If Jesus has not allowed this, it would not be a sacrifice. I bring this up because for far too many years “Christians” have hated Jews for causing Jesus’ death.

First of all, He HAD to die. It was part of the plan to rescue us from the penalty of sin: our own eternal death.

Secondly, it was a small group of Jews who were used as a tool by God to secure salvation for those of us not born as one of His Chosen. While we hate it had to be this way, we should be grateful that God made the way, whatever tools He used.

As we consider the cost of our salvation during this time we call Holy Week, let’s remember that Jesus knew exactly what was going on. It’s why He asked the Father to remove this cup of wrath from Him. It’s also why it’s so important to us that He said, “not my will, but Yours be done.”

He allowed Himself to be treated as the worst slave, the worst thief, the worst enemy of the state.

He humbled Himself.
In obedience.
For you.
For me.